closely followed by the second

I may be the last blogger to make a Moneta dress. But I have finally got round to making up this popular pattern- twice.

I haven’t made many stretch fabric items but have been trying to practise since acquiring an overlocker last year. The style seemed to be a nice comfy wear and the pattern is meant to be relatively easy.

My first make was a standard Moneta using a jersey from my stash. ( fabric from Leon’s in Manchester) In( almost) parallel I made up a second version ( fabric from Fabworks) with the addition of a collar ( add on pattern available from Colette patterns)

FItting of the pattern was easy. Jersey is forgiving, and the larger cup size in Collette patterns works for me. I made my usual adjustment to the bodice, shortening it as I am short waisted. I still had to readjust this slightly on the first dress due to the weight of the skirt pulling down the bodice when attached.

All did not go easily however! My first problem was with the use of elastic to create the gathered skirt. I used the suggested clear elastic. I am not sure what the problem was- maybe it was the quality of the elastic?- but  it tended to split when being sewn on. In addition- and causing more problems – the elastic seemed to coat the machine needle, and as the coating built up the thread continuously snapped. What I hoped would be a quick and easy method was lengthy and frustrating.

I also had problems with the necklines on both versions. On the first dress it seemed to stretch out- maybe next time I need to stay  stitch?. I have “solved ” the problem by adding small darts which are virtually invisible but reduce the size of the neckline. 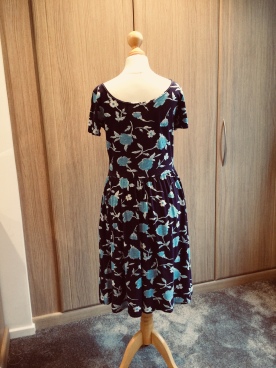 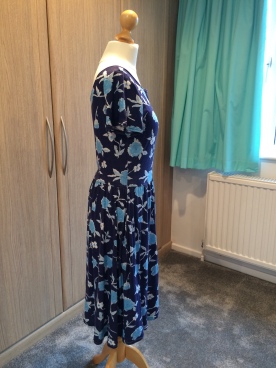 For the collar dress I decided to make the collar in a contrast fabric. The neck   does not seem to have stretched out as much but the feature of the overlapping back seemed to create too much weight and resulted in it pulling the back of the neck over and down.

I have tried a number of methods of rectifying this but in the end settled for hand stitching  the back of collar into place to prevent the downward drag. I was not 100% pleased with the result. 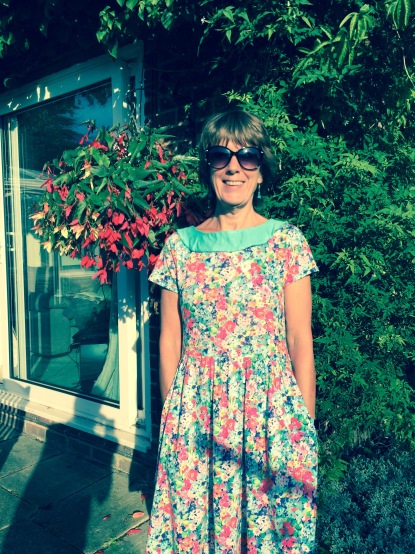 So after wearing it a couple of times I made the decision to completely remove the contrast collar.

closely followed by the second

To keep the shape of the neckline and deal with the now larger neckline I finished it with a bias band- similar to a t shirt neckline. And I added a small pleat to reduce the now stretched neckline 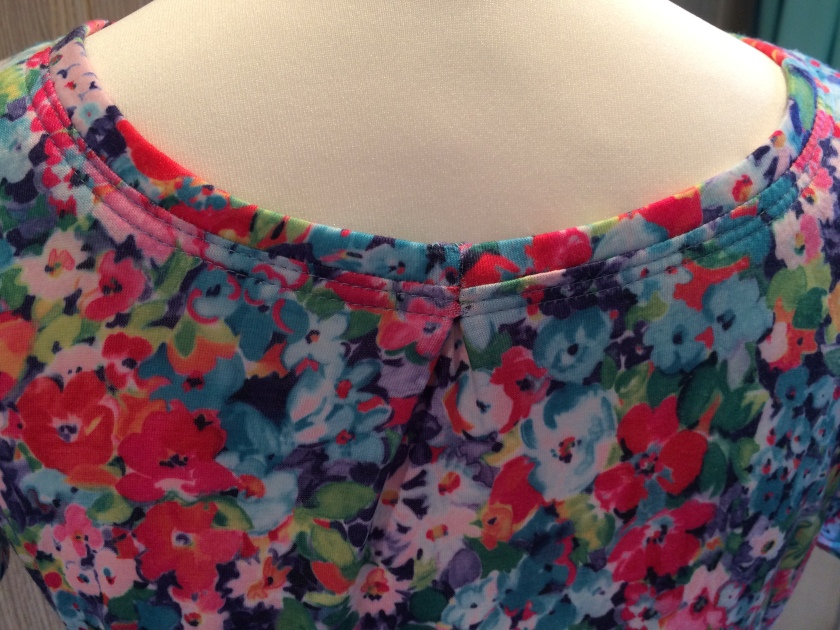 Despite all the problems I do like the pattern! The dresses are super comfortable to wear and the shape is flattering. And of course the big deep pockets are lovely.

I guess I need to try it again with the aim of eliminating the problems. Any tips anyone?

I love to sew, buy fabric and travel. I live in the South east of England which is handy for fabric shopping in London and Brighton and flights from Gatwick airport!
Loading Comments...
%d bloggers like this: